Getting the most fun from your hobby

Greetings all, I thought I would talk about a subject I consider essential. Making The Hobby into Your Hobby and getting the most fun out of it as a result. This might seem to be fairly basic stuff but it is amazing how often you hear people talking about elements of their hobby as a chore or seeing a proscribed view - often I'm afraid from the internet - as being the one true shining way that they must follow. I'm here to tell you different. First, some definitions:

The Hobby: The entire spectrum of activities relating to Wargaming that exist regardless of whether you like them or not.

Your Hobby: The elements of that vast spectrum that give you pleasure and thus form the activities in which you most often partake.

So straight off the bat we see that there is a need to identify what the elements of our wonderful hobby are. To help with this, I've made diagrams (get me with the technology): 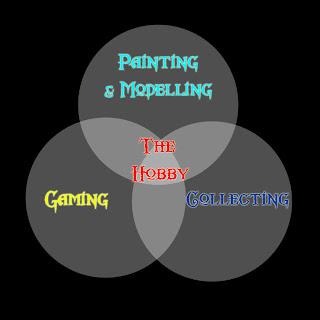 In its simplist form the hobby exists in three parts: Collecting miniatures; Painting & Modelling them and then Gaming with them. Now straight away we can recognise different sorts of hobbyists, the fellow with boxes and boxes of unpainted figures might emphasise the Collecting element. The chap - or indeed chapette - with lots of individual painted figures but no recognisable army falls more firmly into the Painting & Modelling section. Most of us are somewhere in the middle. Now this is as far as most people take thinking about their interaction with The Hobby, but in order to take that next step of truly making it Your Hobby we need to go a little complex. Lets take Gaming for example: 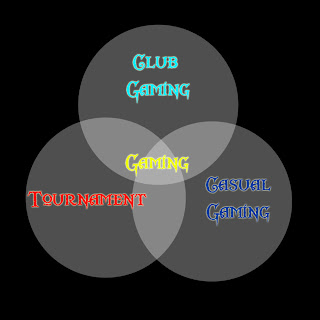 Most games played fall into one of three catagories: Casual - or Garage - Gaming is where you have a circle of friends who play, you meet up semi regularly and have a game. No more organisation than that. Club Gaming by contrast starts with strangers meeting in a venue provided for the purpose to play games. Tournament gaming is where you actually journey to a place where a competative gaming event has been organised. Now notice that I have not talked about competative vs. so-called "fluffy" gaming. That is a whole other thing and is spread across all of the different elements of gaming. It is though essential to your creating Your Hobby that you understand what sort of gamer you are and find people to play who share your views on what makes a good game. But I digress, we are still defining the elements of The Hobby, not yet crafting Your Hobby. 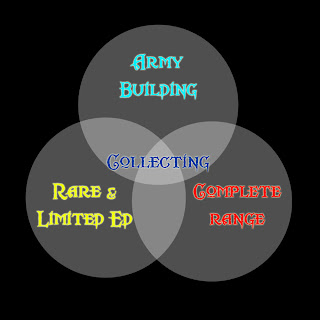 Collecting is one of those weirder elements of The Hobby, we all do it to a greater or lesser extent. Some people write army lists, only buy what they need from that list and therefore have a very tightly controlled Collecting element. These people also have more money than me because their discipline avoids the Shiny Model Syndrome that causes people like me to buy something on impulse. Then there are the completionists who like to own an entire range. The "Gotta catch them all" mindset. Nothing wrong with this - your bank manager may disagree - I've done it with Dwarfs. Then there are those who chase the rare and limited editions, essentially a more classic form of collecting that is in essence the same as the antique hunter. Most of us do a bit of everything, some do almost none of it and just wind up with the models that they thought were cool at the time. All valid options. 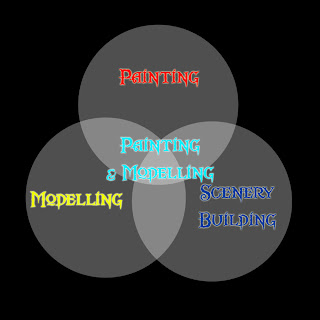 Now the section I know most about, Painting & Modelling. This splits down further into Painting, Modelling and Scenery Building. Modelling also has its subdivisions but they are mostly small, Kitbashing vs. Conversion and Sculpting and so on. Essentially for me, modelling is working with the construction of a model to make it suit your needs. How you do so is largely a matter of skill, imagination and practice. Likewise Scenery Building has it's distinctions, scratch builds vs. working with kits and the like but you tend to either like it or not! Painting though, oh, Painting can be the very devil of this hobby and splits down as follows: 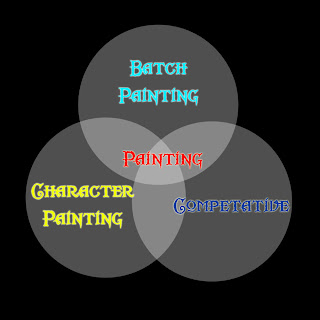 There is Batch Painting where you are content to churn out larger groups of figures. This is closely linked to Army Building in Collecting and tends to be how people with fully painted armies wound up with the whole thing finished. Character Painting - for my definition - is where you lavish attention on single figures or small groups. Competition painting deserves its own catagory because although it is a facet of Character Painting, the time investment for competative painting is ridiculous. Check out Sproket's Small World if you doubt me!

So now we have defined the elements of The Hobby, how do you make The Hobby work for you. First, decide which of the many and varied elements of the hobby appeal to you. For example, this is mine (debated whether or not to do this as it feels like I am proscribing a hobby, ignore that! Hobby for yourselves): 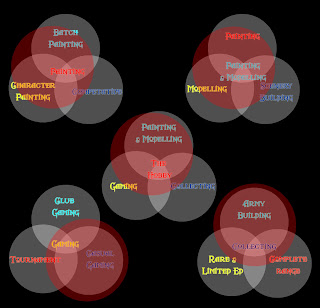 So looking at the image above. I now think about what I am actually DOING with my hobby right now. Unfortunately, being that I have thought about this process I have sort of optomised my hobby experiance over the last 23 years so instead, I shall use my wife as an example of there being a difference between what you like and what you are doing. Lucy - Mrs PVP - loves lavishing attention on a single model at a time. She's good at it and likes the results. Batch painting has almost a physical repellance for her. Just does not enjoy it. However, she was designing a Skaven army. Now this straight away sets up an area of conflict within Your Hobby. In order to ever, ever finish a Skaven army you will need to chunk out some serious piles of Clanrats and that just isn't Mrs PVP's bag. Instead, we took a look at why she likes the Skaven - bestial, mostly - and found an elite army that would meet those likes, in this case Ogres. So now she has an army to work on that has less models that one unit in her Skaven plan. Now this isn't to say that she shouldn't paint Skaven, far, far from it. Just don't expect to enjoy grunting out 3000 points of them if there isn't the enjoyment of the process.

Other solutions to that same problem might be to shift to a skirmish style game, Mordheim for example, that encourages the style of painting that you want to do. If big fantasy gaming is your bag then look for an option that allows you to do it while enjoying the entire process. In my case, at one time I was doing most of my gaming in a club environment. Now I know lots of people love gaming clubs but I am not one of them. I prefer to know my opponant before the game starts as that means that the social experiance will be good as well as having a compatable gaming mindset. It had gotten to the point that I thought I didn't like gaming so much. It wasn't that, I just didn't like playing total strangers. Once I shifted all my gaming to Casual style I was in hog heaven once more.

Essentially what I am trying to say is that if there is an element of Your Hobby that you are not enjoying examine it. Find out the root cause of your lack of enjoyment. This is Your Hobby for heaven's sake, if you aren't enjoying it then there is nothing in it for you! Seek the root cause of the problem and then make changes to accomodate it. This might mean some dramatic changes, different games, different opponants, abandoning projects but ultimately you will have a happier and healthier hobby. I finish by including one of those compiled Your Hobby images that I used to show what I did just in case it helps. Let me know what you think in the comments and share this as much as you like. Lets get everyone thinking about their hobby, not The Hobby. 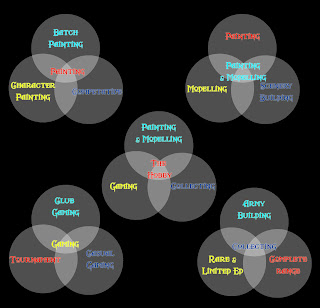 Email ThisBlogThis!Share to TwitterShare to FacebookShare to Pinterest
Labels: Philosophy, Your Hobby