Greetings all of you wonderful people. After a fortnight in the hellish wilderness of the land of Nointernetconnection I am finally back in the 21st century. To my considerable surprise this has also coincided with Pirate Viking Painting's second birthday! 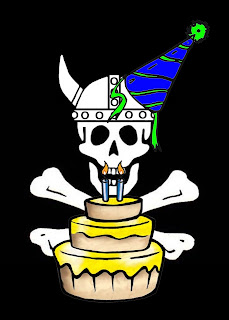 Two years have certainly snuck up on me, the third year will be very, very different to what has gone before. From working on a folding table in a mate's living room to my own house with it's own purpose built painting area (!). Don't worry, pictures to follow. But talking about differences, what a difference between the first birthday and this. Last year I was wildly excited to have found 6123 unique visitors to the blog. Today that number stands at (drum roll please Mulder) 21,003! TWENTY ONE thousand of you generating 46,405 hits! Good lord, that's a lot for a random bloke in Cardiff painting goblins. You are all people of magnificent taste. Clearly.

We have quite a lot to do before we are fully back, I guestimate next Friday. But then there will be pictures and tutorials and news and all sorts. Until then...

Well folks, the time has come with alarming speed to relocate the lair of the Pirate Viking. Mrs PVP and I are putting Mulder in his carry case (y'know, like a cat) and our stuff in the modern equivilent of tea chests. 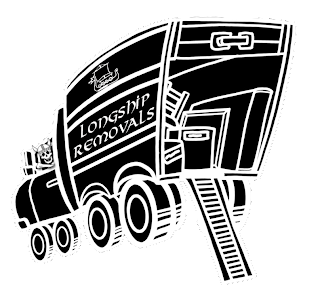 Obviously this means that productivity is going to be non-existant for a few weeks and I am even going to be without internet access for a few days. I am really looking forward to creating the new painting area and moving stuff out of storage. Very exiting times. So I hereby sound the Impending Blackout Klaxon and place PVP on hiatus until further notice (I reckon two-three weeks before the next post). Hopefully I shall see all of you magnificent people again then!

The Female of the Species

Well, I'm back! As usual after an extended break I try to do a fast project as a warm up before launching into anything high intensity or intricate. As such I present this trio of lovely lethal ladies: 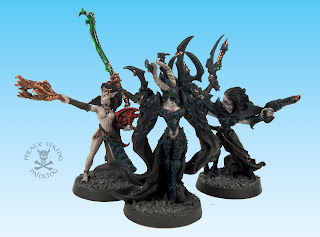 These were painted for a client as Dark Eldar (despite only one of them being an actual Dark Eldar) as the first models in a speculative army. Sadly the pictures haven't quite done them justice (the contrast between the dark turquoise and the black is much more marked in real life). 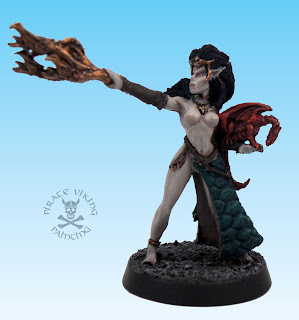 No such contrast problems here though. This is a Raging Heroes model masquerading as a Wych character. I wanted to create a very cold, bloodless look to the skin. Seeing that the new painting guides recommend Raketh Flesh as a base for Dark Eldar I tried its old school analogue, Dheneb Stone. A couple of thin coats later and I had a solid smooth base coat to work from. I then threw a wash of thinned Ogryn Flesh over the whole lot and let it dry. Highlighting started with thinned Dheneb Stone and then proceeded upward by adding white to the mix. Mucosal membranes (lips, nipples etc) were picked out with a very small amount of Vallejo Tanned Fleshtone added to the Dheneb Stone mix and then highlighted again. It's important to be subtle with this as it is waay too easy to go down the "hooker" look and bare skin plus cold air does not make for dark colouration! 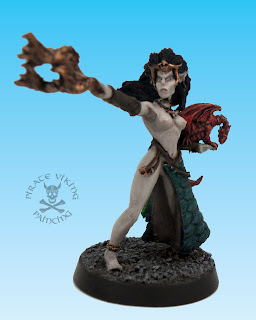 There are a few things that annoyed me about Raging Heroes sculpting, one of them being the left leg. It looks good there right? It's non-existant. That inner part of the cloak is a solid, flat plane. I had to paint on the suggestion of leg and shadowed dragonhide. Thankfully it worked but would it have been so hard to cast the leg in two parts and get a sculpted 3D leg? They also have a problem with neck joins, the head only seems to fit on one side, the other side of the neck sticks out a little. These are small whinges but when a company is getting so much right then the knucklehead stuff gets on my nerves. 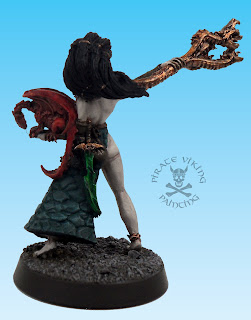 Weapons though, now weapons they do very well. The hydra staff is really nice and the dagger is classic Dark Eldar styling. I decided to paint all metalwork in an Orangey-Brown bronze as a nice contrast to the turquoise. It's easy enough to do this, basecoat with Dwarf Bronze, highlight with a mix of Dwarf Bronze and Mithril Silver. Once dry, glaze with Brown Ink. Done! The dagger colour I'll talk about later. 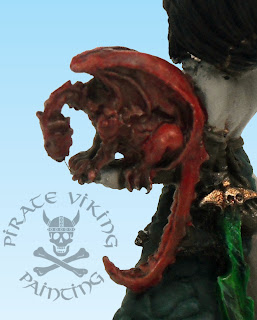 I wanted to try and get a "realistic" looking skin tone for the little dragon. I achieved this by first basecoating with Tallarn Flesh, shading this down with Devlan Mud and leaving it to dry. I then got the red colour I wanted by glazing the model twice with Red Ink mixed with Glaze Medium. Make sure you've let the first glaze dry completely before applying the second. The second model was also a Raging Heroes offering, I dubbed her Malificent as she just screamed Disney villainess. Wonderful model, same problem with the neck join but ho hum. I went for a dark turquoise armour as this is a classic evil colour. My method, through some trial and error, is to start with a 3:2 mix of Orkhide Shade and Hawk Turquoise. Highlighting started with a 1:1 mix of Orkhide Shade and Hawk Turquoise, I then added increasing amounts of white to the mix up to nearly white on the edges. Finally the armour was glazed in a mix of Green and Blue Inks to re-establish the deep turquoise. 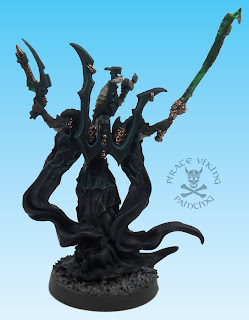 I didn't want the robes to be the focal point of the models as any future army would be deep turquoise armour not cloth. As a result I used German Grey as a basecoat and glazed it down with a few layers of Badab Black. Highpoints were hit with German Grey again to further define the folds, done.

An interesting challenge was minimising the amount of metal present, I wanted to enhance the alien feel by using only bronze and - what I eventually settled on - green stone. This was supposed to look kinda like coloured flint or something. I started with a basecoat of a mix of Scorpion Green and Orkhide Shade. Regions of shade were achieved by wet blending in increasing amounts of Black to the base shade. Lighter areas were made by painting pure Scorpion Green and then adding a little Sunburst Yellow and white to the mix to create a yellow-green highlight. Finally I added thin lines of white to the edges and little catchlights on the sharpened edges. A glaze of Green Ink intensified the colour and finished the job. 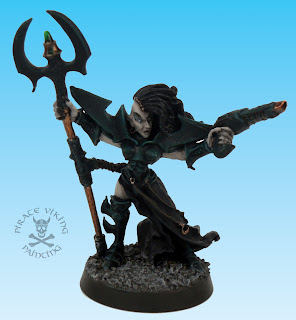 Last on the list is an old Dark Eldar Lord. Before I mention any painting considerations I would just like to take this opportunity to beg Games Workshop never, ever, ever to allow Gary Morley to sculpt anything again! There are so many weird parts on this figure. The hands to begin with, they are longer than the entire head. The right hand has fingernails like talons, the left has none, the arms are sculpted bare from the front and armoured at the back (unless Mr Morley thinks triceps look like flat plates glued on). Finally the staff is connected to the back of the warrior for no... good... purpose. 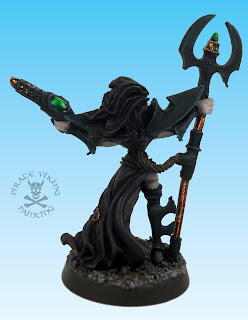 Seriously, I use polearms from time to time and I cannot think of a single reason to do this. It just makes no sense at all. Grrr. The only real differences in painting this model was to add some blue eyeshadow with Asurman Blue wash. This was to diminish the effect of the weird eyebrows. All in all I am actually fairly pleased with happy with how the model looks, the paint scheme seems to work despite the sculptor's best efforts. Using the same green as the stone blades as power cells on the staff and the pistol helped to bind the trio together.

That's all for now folks, some more models soon! We move house in 11 days though so I imagine there will be a certain blackout period then. I will though after that have my purpose designed painting lair. Buah ha ha ha haaaaa!