Greetings one and all, today we have a collection of Imperial agents and soldiers. All part of the increasing Inq28 forces I'm painting for the same client as Project Leviathan: 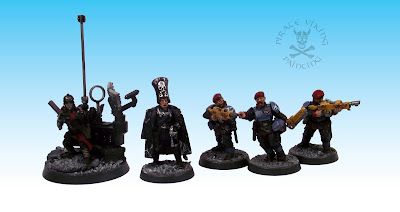 These three elements are - from left to right - an Inquisitorial acolyte raised from the ranks, an Imperial officer with something of a Goth complex and three members of the Mordian 7th:

Wait, the Mordian 7th... that name seems familiar... well, if you are in the same blogging circles as me you might well have run across the Mordian 7th in the blog of the same name. My client asked me to replicate the paint scheme so as to represent some of the 7th among his command staff on this side of the Atlantic (I believe they natter online). 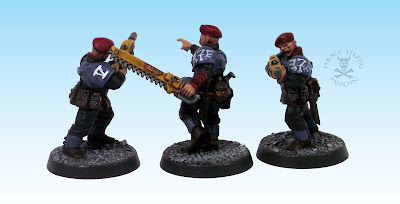 Obviously, taking cues from another painter's scheme is often a cornerstone of a commission painters world. We're often matching from photos or other reference material. In this case I had to interpret a few details but for the most part there was plenty of source material on the blog. I wound up using the same yellow as my Averlanders for the weapons, "The Fang" and associated layer colours for the armour and some Vallejo chocolate brown for the leather. The beret colour could have been either the blue-grey or the red. I decided on the red mainly for colour balance reasons. It picks out the red from the piping and the grey is already nicely spread across the model. No need to add any more. 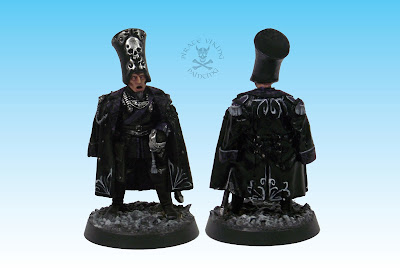 From a model with quite a specific brief to one where my brief was "Goth Officer". A Gofficer if you will. Being a man with Cruxshadows, Opeth and Sisters of Mercy (neatly pigeon-holing my age) well represented among a lot of similar music in my collection this was a brief I could handle. Sadly... the camera just can't. It's one of those models with subtle transitions of colour and texture that studios never ever use for this exact reason. It doesn't photograph well. There is purple brocade in his coat lining, as well as on the uniform piping and sash. Everything else is silver, either faux NMM silver or just straight up metallics. If it isn't either of those choices then as Ford once said "any colour so long as it's black". There's black leather (starting from a brown base), black cloth (starting from a grey), gloss black armour, black hat, black... oh you get the picture. For a bit less rambly musing on painting black, go check out the 54mm (and thus more photogenic) ninja post. 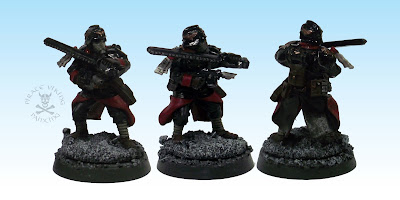 Finally we have the Inquisitional Acolyte, another fond user of black and red with lots of chipped gloss black armour plates and brass bits... what's that? You swear he had a scenic base? Well you were right! 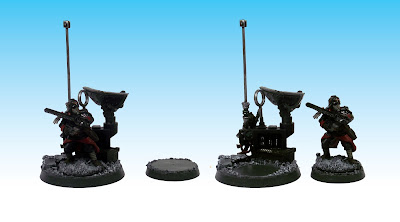 The client wanted a vox caster included on the base and in discussions we realised that a planetary scale unit might be more cool for an Inquisitor's henchman. Sadly this would make him a bit unwieldy so using the same magnets and flex steel technology from project Thunderbolt I gave him a swappable base. 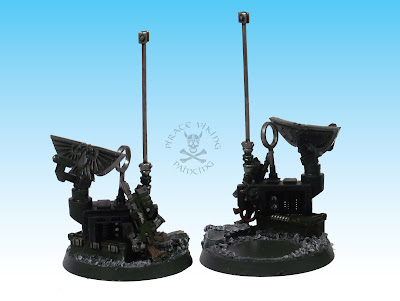 The base itself features an old battered ammo case as a table, an Apocalypse vox caster nicked from a tank and the acolyte's lasrifle with underslung grenade launcher. Worked out nice I think!

That's it for today, nothing too deep, just shallow dives into some progress tracking. Have a nice weekend folks.

On the Workbench: Bullet Holes and Broadsides

Greetings one and all, today we get to riddle things with holes and set stuff on fire, ooooh yeah! 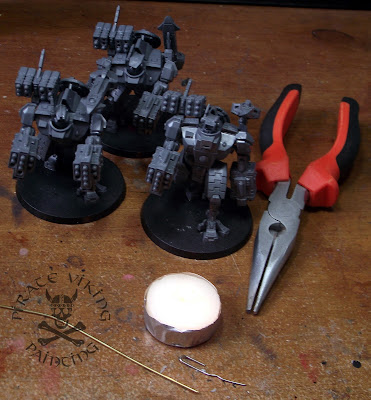 Y'see, I've been asked to do a trio of Broadside suits for a client and mercifully, he wanted them modelling distinctly "mid-battle". Dirt, grime, fired missiles and that can also mean, battle damage. Now this makes me very happy as grimy Tau are best Tau in my opinion. But it also made me realise that this was a perfect opportunity to show you my method for making bullet hits. You'll need a source of heat (I used a candle, yeah, that's what we're setting fire to, sorry to lead you on but heck, you're reading now...) a couple of thicknesses of wire and some pliers or other wire-holding, hand-protecting gubbins. You'll notice there isn't that perennial go-to of bullet holes, the pin vice. That's because sadly, they don't work for this job. Bullets are not neat hole-generating devices, unless they go clean through thin materials, instead a survived hit on metal tends to look like this:

So how do we create these? Well, in the bad old days of metal you had to drill out a bigger hole, fill it with green stuff and then shove something in to distend the "metal" out from the impact. When plastic is the material?


Just heat a wire and stab the model. No really, it is that simple. You will need to play at getting the right temperature and practice the timings and such (sprue is great for that) but it isn't much more complex than that. 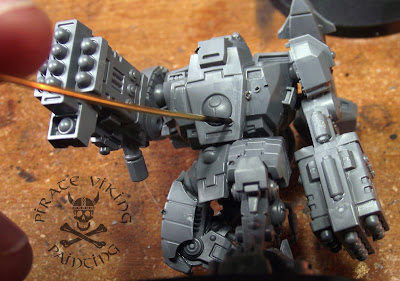 A good trick is to go in fast with the hot wire and then pause, wait for the wire to cool enough for the plastic to solidify again and then wiggle it out. You will leave streamers of plastic every now and again but they can be trimmed later, the upshot though is you are left with: 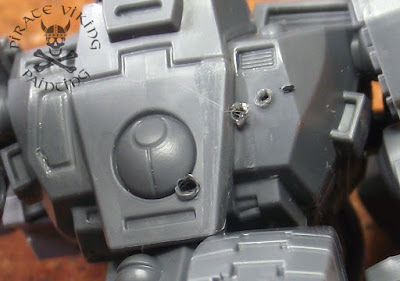 Gorgeous, damn near perfect bullet impacts for practically zero effort. You can push all the way through a plate and leave a crater in a surface behind it. You can push through across a corner or along a plate to leave a ricochet scar or a through-and-through. You can even use a hot knife to create claw marks where some metal-chomping Tyranid beasty has got at it. It's very versatile and will really reward some experimentation and practice. 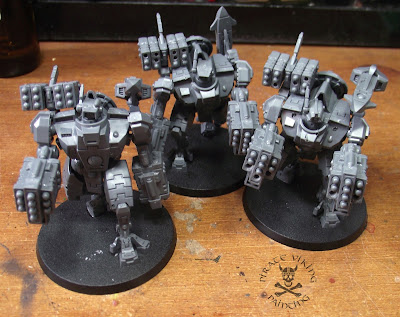 The finished squad, all battle damaged and mid-combat. I've tried to change up the poses as much as I can but those legs are limited by the pins holding the ankle and the solid posed knee (would a two part leg have killed you GW?) make it tricky. After two variants of the pose I knew I had to do some modelling jiggery pokery on the third or look like a line dancing set. I removed the ankle pins and turned the - admittedly nice - braced pose into a stride. It's not easy though, and I suspect with the locked legs GW were trying to avoid this: 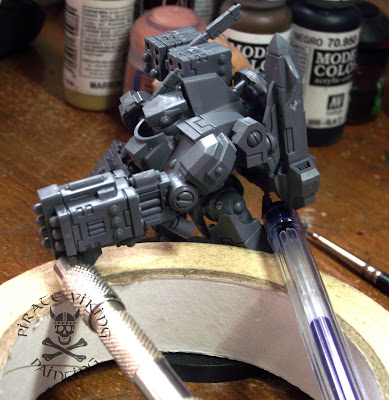 Being necessary while the glue dries. I get the impulse, but seriously, a deeper ankle joint and a hex shaped connector in the knee would have allowed for some more freedom in pose. Ah well, minor grumbles. But while we are talking modelling and modifying the GW kits, all of you should click on the picture below and check out what fellow Beard Bunker dweller Charlie has done with a Leman Russ: 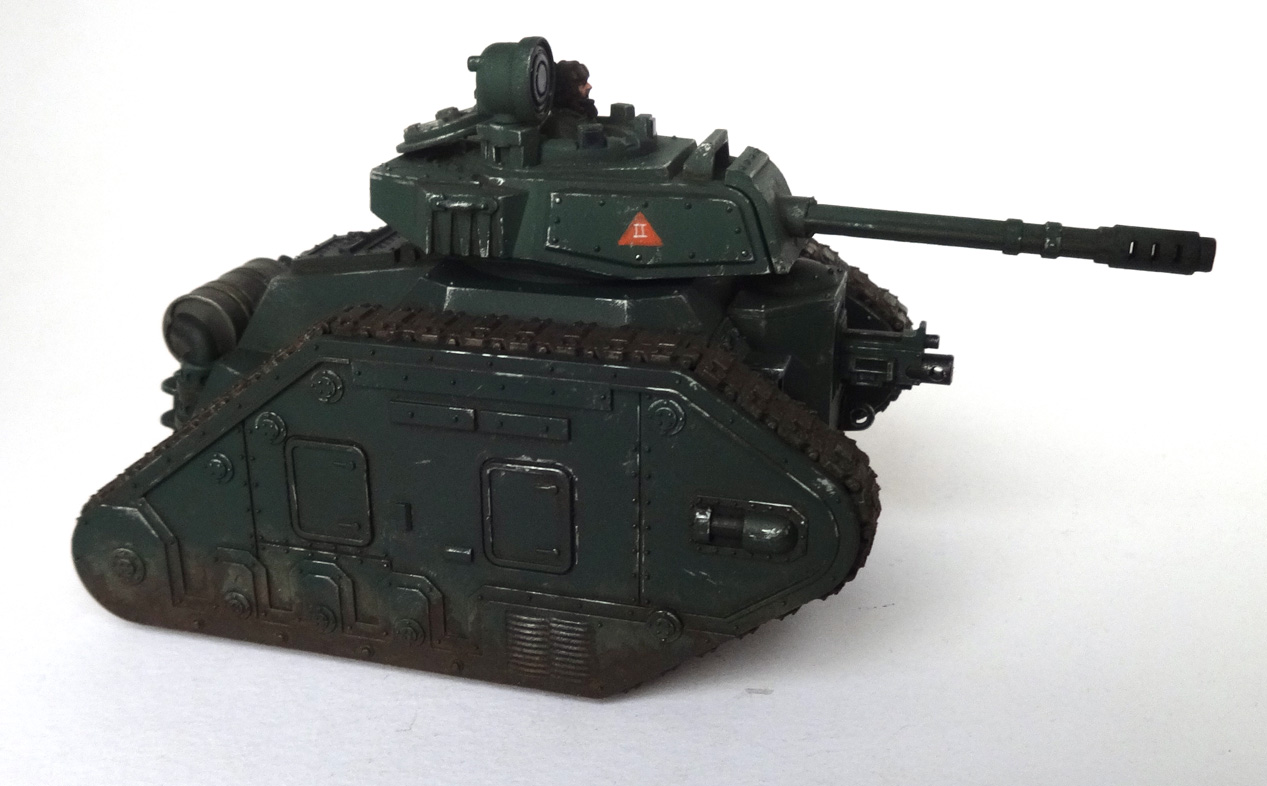 I love it, gives the Russ a much, much more satisfying set of dimensions. Really inspired to retrofit all my company of Russes with the better true-scale battlecannons. Even found a company in Poland who make 1:48 scale Firefly barrels which will hopefully make nice Vanquisher cannons.

Well, that's all for today folks, happy modelling and

Greetings one and all, yes, still here, just took a couple of weeks off. Back and rocking now! Today we have a couple of inadequately clad gentlemen with a serious workout habit:


These chaps are Heresy miniatures Big Boris's - long term readers will know these are the second and third Big Boris's I've painted after my dynamic Big Boris Barbarian - including the Job's A Good Un Boris from the kickstarter (I've got one of these coming once Andy sculpts the new Ogre with Table, sculpt man sculpt! /cheeky). The client's concept for these was something plucked from the awesome depths of the Daniverse (that part of the 40k background authored by Dan Abnett, otherwise known as the bits with actual character, soul and real human lives rather than dakka dakka dakka). Moody Hammers is the term that low-life types use to refer to hired muscle. These two are cloned moody hammers with plenty of vat grown muscle grafted on for extra threat. By the way, these models are huge, those bases are not 25mm, they're the 40mm...


Frankly, there isn't a lot to say about these except skin, lots and lots of skin. So as it's been a while since I talked about it... lets talk skin, Caucasian in this case: there are, it is true, lots of problems with Citadel's paints, but the stuff that is good is very, very good. The skin paints are one of these very, very good ones. I like to start not with Bugman's Glow but with Cadian Fleshtone. I only break out the Bugman's for ruddy toned people. Once a clean coat of Cadian Fleshtone is on, a shading wash of Reikland Fleshshade gives a nice warm tone. From here, start building up the highlight levels. The highlight steps are Cadian Fleshtone, a mix of Cadian Fleshtone and Kislev Flesh, pure kislev flesh and then a little bit of Kislev Flesh mixed with Flayed One Flesh (doesn't seem to be available at the moment, substitute a little bone instead). Now. Those mixes are where the differences between a rank and file dude and something like these moody hammer characters come in. Normally there is at most six stages to skin on my figures (base, wash, base, highlight one, highlight two, edge highlight). I often skip the edge highlight. These had at lease eleven layers blended in, each step in highlighting had a 2:1, a 1:1, and then a 1:2 ratio mix rather than just a 50:50 mix. There was also another shade layer as I thinned Agrax Earthshade and darkened the deepest recesses and the face.


Of course, with all that skin area it was just crying out to be used as a canvas for some mad tattooist. Not having one available, I had a bash at it with some online reference to help. With tattoos, the main mistake people make is using a pure colour, that will always look like warpaint and will visually sit on the surface of the skin. Instead, mix some skin tone in with the tattoo colour and that knocks the colour "under" the skin surface. I can recommend starting with mid 2000's "tribal" style tattoos as you can't really get them "wrong". More complex tattoos like the ones on my sumo D&D monk are a bit more involved and need a bit more practice.

Loved these chaps, lots of fun. Can't wait to get my own one of the JAGU Boris's... sculpt man!