One Man and his Dog (Forgeworld Enforcer)

Greetings shipmates, been a few days since our last post - warhound painting does that - but I had itchy fingers last night and hey presto! A Forgeworld Enforcer appeared: 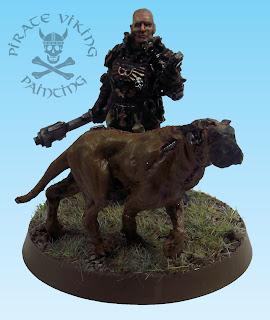 This bad boy is one of Forgeworld's "event only" figures. I was lucky enough to have a mate (Assistant Kogz from the Beard Bunker) grab one for me at Games Day. I'll be using him as a Crusader in my Grey Knight Inquisitor's retinue. Don't get me wrong, I like the GW Crusader models but they don't really fit with the "low profile" Hereticus retinue. 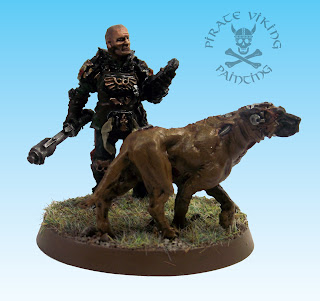 Now the Enforcer is nice enough, a few weird sculpting choices (more later) but nice. The story however is his dog. What a lovely model that cyber-mastiff is. Sadly in games of Warhammer 40k he will be counting as a storm shield but here and now he's just a dog! A quick comparison search between different dog breeds and the cyber-mastiff here made me think that great dane was the best species match for the model. 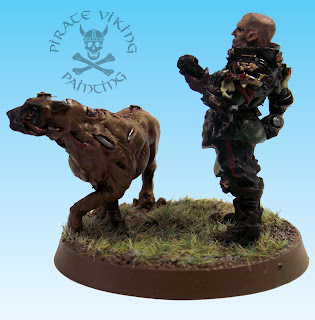 Out of the three or four normal colours for Great Danes I chose fawn as being the most workable and effective on a miniature of this size. A clean basecoat of XV-88 and a couple of highlights by adding Balor Brown got him started and Seraphim Sepia wash toned down the yellows and made him his proper colour. I added black to the highlight mix to paint the face and ears and then got to work on the gribbly bits. 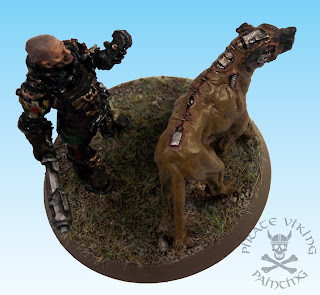 The dog has clearly had massive bionic modifications and the skin has just been tacked back on. I kinda felt that this had the look of hasty field surgery to get the animal back up and running with no concessions to aesthetics or comfort. As a result I made the areas around the wounds red and inflamed. Just add Bugman's Glow to the skin colour you are using and then give it a light glaze of Carroburg Crimson to seal the deal. The mechanical parts I painted bright steel, shaded with Nuln Oil and then added some of my oil mix (brown ink and gloss varnish) to indicate machinery at work. 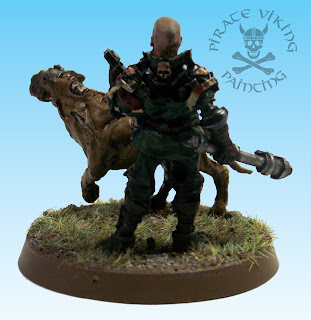 Now for the enforcer. Sadly, he just is not as well sculpted as the dog. There are lot of people out there who seem to think forgeworld can do no wrong, but they have their problems and this model has a bunch of their favourites. Inconsistant limb thickness, occasionally muddy sculpting (where it is difficult to identify what elements are supposed to be) and my personal bugbear. Over zealous fabric folds. It is as though the designer - freed from fear of undercuts - has gone mad with the folding. Look at the clothes here, its tough to see as I've deliberately minimised the effect with painting but his trousers and jacket are about two sizes too large and made of silk to get wrinkles that sharp. Don't get me wrong, I can't sculpt, yet, but I know what wrong is and at the price Forgeworld charge? They should know too. Heavy cloth doesn't really fold like that and light cloth isn't used for this sort of application. But enough bitching, the dog is great (badum tish). For colouring I decided that the Russian Military Police uniform would suffice. Green jacket, dark grey trousers with a red stripe, perfect. 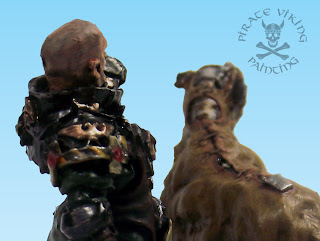 The armour gave me more problems. For one thing it is scattered around the model slightly randomly, the shoulder and neck armour makes sense as it just needs a riot helmet to finish it off but the chest plate and weird receipt printer on his... apron, yep, apron. Just look weird. Why is he wearing an apron for pete's sake? Sure interrogation can get messy in the imperium but there is armour on it... do they not restrain their captives? And in battle? An apron? Stop thinking about it Jeff, clearly cyberdog jumps up a lot and he doesn't want to get his uniform all dirty. Anyway, armour. Initially I tried brass. That threw off the colour balance of the entire piece. Steel, jumped out way too much and called attention to the slightly problematic sculpting choices. So I turned to an old friend, gloss black with brass details. Minimises the sculpting, adds to baddassery and looks kinda policey. Sorted. I added some chips and dings to the edges and painted the raised edges of the shoulder pads with hazard stripes (why? No idea, they look cool and kinda reminiscent of police tape and... ok, I've been painting a warhound titan. Lots of tiny hazard lines as default detail, I defaulted ok?) to make them stand out a bit.

For anyone who is curious about the progress on the titan check out Today I Have Mostly... the PVP daily developments blog, you can also follow this on our facebook page and twitter feed. Ain't I modern? Anyway, that's all folks, enjoy your weekend.