Kick the Tyres and Light the Fires - Forgeworld Pilot

Greetings one and all! Well, after finishing the titans on Wednesday and spending yesterday up to my armpits in attic-sorting-out detritus with Mrs PVP I thought I deserved a treat. What could be a better treat for a painting addict than a model painted for the sake of it. In this case a Forgeworld event only pilot model:

This chap is being added to the retinue of my Inquisitor, more on that later. First, let me say that I love this figure. If you are ever at an event that Forgeworld frequent then pick one of these up, you won't regret it! The level of detail is exquisite, you can see exactly how every piece of his kit operates and fits together. Sadly it does have Forgeworld's almost trademark too sharp folds in cloth. Makes all their drapery look like fine silk rather than heavy cloth. The rest of the sculpting is excellent, a clear purpose to everything he is carrying and stylistically he is somewhere between a WWII aviator and a Soviet cosmonaut. It was the first design motief that informed the paint colours. I found a picture of a Battle of Britain RAF pilot and vaguely copied the colour scheme.

The flight suit is basecoated in The Fang - oh gods, I've never written that one down before. Who calls a paint "The Fang", even adding grey to the end would help. No, sound the tangent klaxon, getting off topic. So after basecoating in... The Fang (sigh), I highlighted by adding increasing amounts of Russ Grey. The end result is a nice RAF blue. The life preserver got basecoated in Vallejo Khaki, shaded down with thinned Agrax Earthshade and highlighted with Khaki and then again with a bit of bone added. 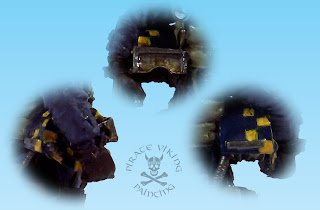 I grew up in the eighties so Top Gun was a major influence. That meant that the helmet just had to have a paint job. Now, at first glance it might seem that all the Legio Astorum painting lately has imprinted me with the Blue/Yellow scheme but there is a deeper reason for it. The yellow relates to the khaki nicely and the blue feels like the flight suit. Essentially they're both more saturated versions of the principle colours on the model. 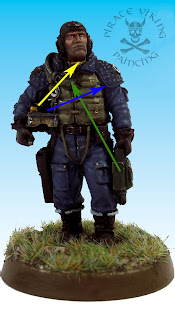 While we are talking about that sort of thing, it is worth mentioning colour balancing. There are three spot colours on this figure. A spot colour is a small patch of - usually - strong colour to improve the visual interest of the figure. All three are repeated on the figure. The yellow checks on the helmet match to the scarf, the blue of the helmet is mirrored by the piping around the padded edges and the military green of the life support pack is mirrored by the mask around his neck. Doing this helps to make a spot colour balance across the model rather than looking orphaned in one area. The scheme looks subdued despite there being six seperate shades on the model. 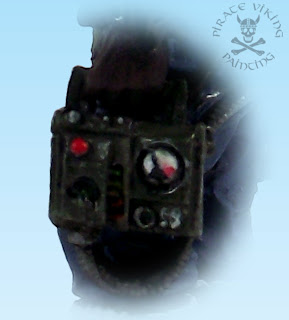 The life support pack is another feature I'm impressed by. I took my cues for painting it from a mix of cosmonaut carbon dioxide scrubbers and Battlestar Galactica style life support equipment. There's even a tiny series of lights to the left of the big gauge ranging from green to red. I figured carbon dioxide concentration or something. 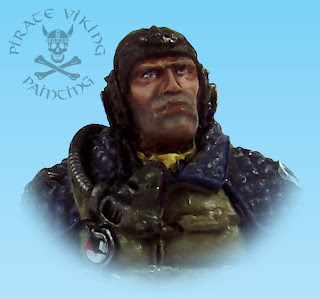 And finally his face. This fella bears more than a passing resemblance to Arnold Schwarzenegger - might have to reflect that in his name later. I actually added the stubble to slightly kill off the similarity as Arnie is clean shaven in every movie I can think of.

So earlier I mentioned adding him to my Inquisitor's retinue. Surely, though, he would be useless as part of the Grey Knights army right? That is because this project has mutated a little. See, I love the game Inquisitor. It expands on the 40k universe and allows you to explore the world beyond the battlefields. Trouble is, it was always designed for 54mm scale models. I love 'em, great painting projects and so on. However... it is scenery that is the serious problem. You have to build a whole range of scenery from scratch as finding commercial terrain in this scale is almost impossible or very expensive to acquire. For a while the Beard Bunker lads and I had been talking about doing Inquisitor in 28mm scale instead. Then, I found that this is a whole thing on the Internet already: Inq28.

This blog is kinda the jumping off point for a whole online community featuring some awesome conversion work that is being a major source of inspiration. Head over and check it out. With that, we are done for the day and the week. Back to work Monday and painting a whole pile of purple vehicles! The twiddly bits are going to be a whole lot easier now that I don't have to reconstitute the Dry Lucius Lilac. I've got an edge paint for it instead! Until next time folks.