He shall from time to time...

150 Posts! Good lord, thats a lot, if you read one a day then you would still be at it in five months. This feels like an appropriate juncture to do a "State of the Nation" bit (that's what the subject relates to by the way for anyone non-American who doesn't watch the West Wing).

So, to start off with, how are those new years resolutions going Jeff? We're at the end of the first quarter, surely you've kept them all so far right? Let's review:

Personal Goals:
Site Goals:
So, personal goals first, the Night Goblins... oops. Off to a bad start here! They are not finished although work has been done. I had a rash of half finished units (half a horde, half the spider riders) and then finally got a KR case for the lot of them and they sort of went out of site, out of mind. I'll have to get my little green dude yen on again. The 2k Nurgle army has been planned and begun, loads of conversion work on the marauders and warriors and painting has begun. This means that I'm nicely on track.

The 40k stuff is one that I have conciously dumped. The rumours of 6th edition impending firmed up in the first months of this year and I decided to put my Guard on hold until then. I have decided that they will use the AWESOME Victoria Lamb kilted legs and balmoral caps and that they will be mostly mechanised to contrast with my previous guard army. So what am I painting instead for 40k? 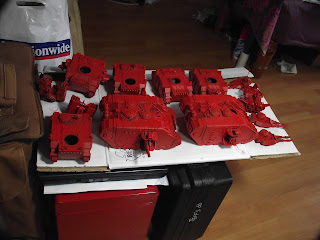 Yeah, more Blood Angels! Who knew huh? I thought I'd make my army a bit more Apocalypse-y by adding a load more tanks and some bikes (not pictured). Truth be told, at that point I won't be far off the entire 3rd company so I might just do that. Now, the Napoleonics, I had hit one hell of a wall on these, painting the Brit's is a nightmare. They have something like eight white straps over their red jackets. This is pretty much the worst colour combination on Earth as the red stains white instantly so any mistakes are catastrophic, painting the white over the red was proving annoying. The new citadel paint range, though, includes - drum roll - a foundation white! Hopefully this should speed up this heinous task and with a quick slosh of Vallejo Pale Wash over the top might, just might, allow me to paint these awesome models!

Now, on to the site goals, so far I have achieved my goal of at least one post in every single calendar week (there is even a post ready and scheduled to go up when I am on holiday!) so that is going well. I have been doing more tutorial work so that is working well too! My support of the Beard Bunker has been a little patchier, must try harder Jeff.

So what of the future? Well, quite a lot is going to be happening to Pirate Viking Painting over the next few months, firstly we are going to be moving locations. Mrs PVP and I have been lodging with friends for the last couple of years but we are finally in a position to get a place of our own again! This means a purpose designed working area for Mulder and I and all of the stuff I have had languishing in storage to hand once more, hurrah! We are also taking the first steps in learning the arcane arts of sculpting and model making and are in the process of writing some of our own games. Hopefully there will be more on these long before we hit post 300!

Finally a word on how we are going to be handling the transition to the new citadel paint range on the blog. We will not be rushing out and replacing the current mega paint set that I own with the new one. That would be insanity. Of course if any wealthy fan of PVP wishes to donate £300 then I for one will be overjoyed! Instead we are going to pick up the "new" colours starting with the base and shade range. Will also pick up one of the textured ones to have a go with and a couple of Dry paints as my curiosity cannot be sated without experimentation. As paints run out I will replace them with their new equivilents. As a result you will be seeing colours on the blog that no longer exist. Use GW's colour match chart to find the nearest new paint as quite frankly I cannot be doing with cross referencing every single colour I use!

Well, thus ends the first PVP "State of the Nation", thanks for staying with us. I've been looking at the site stats ahead of Mulder's second birthday and the growth in readers has been phenominal. I am deeply touched. You are all people of magnificent taste and are all especially handsome.

Email ThisBlogThis!Share to TwitterShare to FacebookShare to Pinterest
Labels: PVP News, State of the Nation